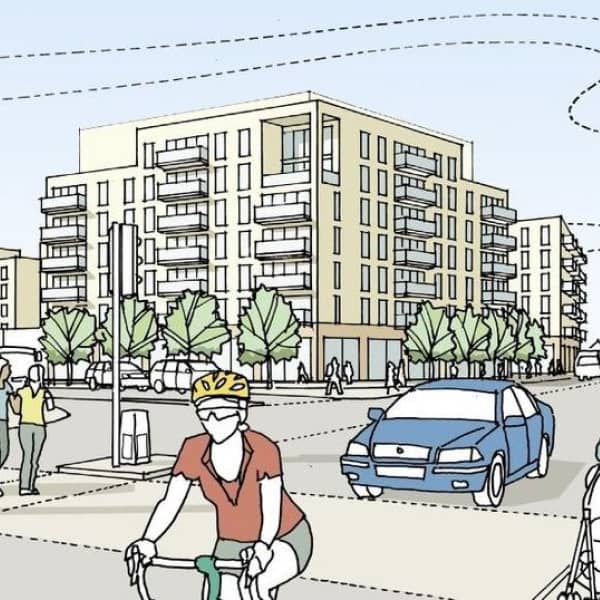 One of South Bristol’s biggest shopping centres could be demolished to make way for up to 880 new flats, a two-screen cinema, library and new shopping streets.

Developers have offered their first official submission to council planners for their vision to transform the Broadwalk Shopping Centre at the heart of Knowle into ‘Redcatch Quarter’, a new development more in the mould of Wapping Wharf, with 12-storey blocks of flats either side of a new pedestrianised street lined with shops, restaurants and bars.

Bristol Live first revealed the plans back in January, and since then the developers have conducted a consultation and an exhibition of what they want to do to the landmark 1970s shopping centre on the junction of Wells Road and Broad Walk in Knowle.

Now, the developers have made their first submission to Bristol City Council’s planning department, asking whether they need to include an environmental assessment when they do eventually submit a formal planning application.

And it reveals for the first time officially the scale of the development, which will occupy almost all the space between the Wells Road and Redcatch Park.

The developers said the site could have up to 880 residential dwellings, 7,430sqm of commercial floorspace, 190 sqm of community use, a 320sqm library – which would replace the library that’s in the existing Broadwalk Shopping Centre and 870 sqm given over to a cinema or theatre. On top of that, the developers say the site will include 360 car parking spaces, mainly in an underground car park underneath the development, and cycle parking for a total of 1,455 bikes.

The development would create new streets – one would be a pedestrianised street going from Wells Road to a new entrance to Redcatch Park, and a second would be a service road for the development which would cut across north-south from Redcatch Road almost to Broad Walk.

The site already has planning permission for the shopping centre to be demolished and rebuilt with hundreds of flats. Before the pandemic, developers submitted a plan for 420 new flats and shops – again 12-storeys high – which was eventually given permission by council planners last year.

But the site changed hands and the new developers said the pandemic meant a change in shopping habits, so a new plan with more homes and less space for shops was needed.

The developers said they hope to submit a formal planning application for the new project this summer.

The artist’s impressions of the site reveal the 12 storey block of flats in one drawing would be located at the south western corner of the development site, closest to Redcatch Park on Broad Walk road itself, while the other residential blocks would be around six to nine storeys high.

If the development does end up having a cinema, in the long term it could be the only one in South Bristol, after planning permission was given last year for the Hengrove Leisure Park to be cleared – including the Cineworld multiplex there – for more than 300 new homes.